Unity. Vision. Courage. Respect. Does it sound like I’m describing Eagles players? It is definitely possible. (Hint: Look at the title. It's in binary code. It would be safe to assume I’m totally not referencing sports right now.)

No, I’m referring to senior project teams for Computer Science and Software Engineering. This month, we’ve formed our official project teams (though I can’t tell you what we’re all working on. You’ll have to stay tuned for that!).

What goes into a team? Well, there is quite a lot, actually. 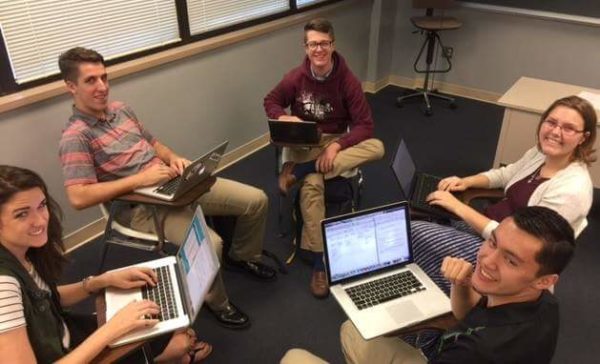 First, we were presented with possible development ideas. From that, we voted for the top three that each of us would personally like to work on as well as requesting up to two people to work within a team of five.

From these lists, the Project Manager (PM), and the Assistant Project Manager (APM) handpicked the teams based on their experience with us. Because we all picked the same project and generally requested each other as teammates, the team started with a common background and a common goal.

We had “gel” and “synergy,” the stuff that great teams are made of. If you ever take Software Engineering II as a class, you’ll find out that those are basically just fancy terms that mean we’re an awesome team that produces great work. The team votes for its team leader, and I happened to be honored enough to be voted my team’s leader.

All teams have picked to follow the Scrum agile development methodology, which basically means that we believe the best team is a self-organizing, self-motivating team that produces increments of functionality at the end of each development cycle. In short, we get stuff done.

We’ve had to officially pick and present our development methodology to the class as well as present a basic development timeline. We also have our requirements to present, which are the elements that YOU, the user, want.

I’ll be honest, you’re going to be blown away by all four teams! Next time, find out more about what actually goes into the logic and coding of our projects for the Software Engineering Expo in April. See you there!