Off They Go into the Wild Blue Yonder 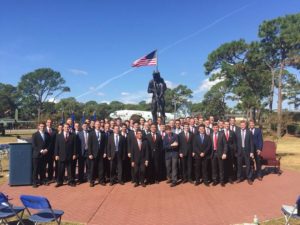 One Accord is the growing men’s ensemble that has become a campus favorite. We are composed of student volunteers from a diverse group of majors—biology, business, pastoral ministries, and pre-med just to name a few. Since our debut, we have been able to minister to the community, the student body, and veterans.

Last semester, we sang the national anthem for a memorial service of fallen Special Tactics airmen. The Air Force even had one of their aircraft fly overhead the singers as we sang the national anthem—the Air Force Chief-of-Staff was present by the way. Following the speeches, many (including myself) participated in memorial push ups. If you want more information about this event, read this article about it. Side note: during this event, I thought that only a few hundred watched us, but during chapel when the Air Force representative said that millions live streamed the event, that blew my mind! 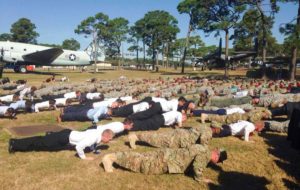 Here's One Accord (on the very far left) participating in those Memorial Push-ups (courtesy of Air Force Special Operations Command):

That same week, One Accord sang the national anthem for Eagle Mania. I don’t even want to spoil the awesomeness. Instead here’s a video:

Pretty tight? Amma right? The best part is that these videos are only a few of the numerous performances we did! Yes--there's more, such as Sunday Schools, church services, and Student Body. Sorry I wasn't able to share it because of copyright laws--but hey! That should be more incentive to come watch us if you hear about us singing nearby.

This spring semester, look out for One Accord near you. (Not one Honda Accord.)

View all posts by Remmel