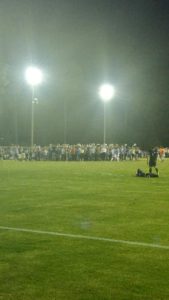 This is probably not the first time you've read about the Eagles' first soccer game, (see here and here) but how can you not talk about it? It was our first intercollegiate soccer home game in thirty years, and we beat the defending champions. I think that's a big deal.

Although I am a huge sports fan (coming from the Bay Area of California), I’ve never been much of a soccer fan, but I wanted to show support for the first Eagles soccer game at home. The PCC Eagles did not disappoint. In fact, I lost my voice cheering at a soccer game. That's a first!

The game started with a bang. During the national anthem, fireworks captured the attention of the crowd; then, the inaugural home game began with a new field, a new team, and a new atmosphere. Interestingly, a plane flew overhead that had “Go PCC” on its wings. In the past, the Eagle Field was called College Field, where students cheered for which collegian would win the Turkey Bowl; but now, the students came together at Eagle Field to cheer for one team, our PCC Eagles.

The game ended with a bang. Regulation time wasn’t enough as the Eagles went into sudden-death overtime. The game felt like a championship game with emotions swinging all over the place. The end came when a freshman—a freshman!—kicked the game-winning goal with two minutes left. Eagle Field erupted as hundreds of fans stormed the field to congratulate our beloved Eagles. Truly, this game was a storybook finish to the first home game of what will be a great athletic program for years to come at PCC.

You should read what my fellow blogger wrote about to get the whole picture. After doing that, check this video out:

View all posts by Remmel