Shall We Play a Game? 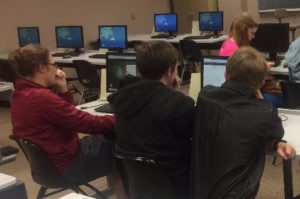 Video games, at least for me, have pretty much become a thing of the past. It’s not that I don’t find them fun; it’s just that my schedule has unfortunately become too busy to squeeze them in. So you can bet I was pretty excited to get a chance to play one at the 2016 Software Expo a few weeks ago!

Before I go any further, let me briefly explain the purpose of the Expo. Since last fall, all of the senior Computer Science & Software Engineering majors have been working together to develop several programs: eVal, a teacher/course evaluation system; FAStickets, a simple method for purchasing Fine Arts Series tickets; and Clockwork Conquest, a networked strategy game allowing players to compete against other human players. Finally, after hundreds and hundreds of hours spent coding these programs, the students finally have the opportunity to show off their hard work at the Software Expo.

Now I thought that all three programs were designed very well. However, I have to say that Clockwork Conquest was my favorite. The game functions similarly to other well known world conquest games. Basically, you build an army, send them off to attack, and try to take over as many territories as you can. Meanwhile, your opponents are attempting to do the same.

Here’s the catch: you and your opponent can’t see each other unless you conquer adjacent territories. So while you think you might be taking over large swaths of land, little do you realize that the enemy is amassing a huge force that will soon come sweeping across your domain. In short, I found the game really fun, and I actually won twice.

After the Expo, I interviewed Caleb Mann, one of the computer science majors who developed Clockwork Conquest. When asked for his thoughts concerning the Expo, he told me,

“It’s satisfying to see people enjoying something I helped create. One guy told me he would buy the game if he could. I’m thankful that my hours of programming were not in vain.”

I then asked him what he had learned as a result of working on this project. He said,

“Developing the game was tough, full of roadblocks, and definitely out of my comfort zone too. I think one of the biggest things I learned was being able to adjust to other people’s schedules. In life, you can’t always do things when it’s most convenient for you; instead, you have to be willing to adapt to the best interests of the team.”

Overall, the Software Expo was definitely worth attending. I found it educational, enjoyable, and a rare chance to play a video game again!