The Play-full Side of PCC

There are a lot of things here at PCC that you can do with your free time—and just so you are aware, no, I'm not about to even attempt to list them all. Instead, I'm just going to talk about what I do in my free time. Yeah I know, it sounds a bit self-centered, but hey, "write about what you know" as they say. Anyway, I'm getting off topic...

So what do I do in my free time? Well, I'm very glad you asked. I spend most of my free time time hidden away in some obscure room of either the VPA, Crowne Centre, or St. John Building frantically trying to take something written on paper and use my voice and actions to bring it to life in such a way that when I perform it before a large assembly of people, they are emotionally touched by it. Confused? Fine, I'll go with the simple definition—I like to act in plays. (Yes, I know, this is a very round about way of getting to the point, buy hey, it's held your attention so far hasn't it?)

The most recent play I've been in was the Graduate Speech Education Recital Anastasia, directed by Miss Melanie Lawrence. I played the role Dr. Michael Serensky, a friend from Anastasia's past who is trying to convince her that she is not the Grand Duchess Anastasia, but rather a peasant girl named Anya. The production was a lot of fun, and I really enjoyed being a part of it. 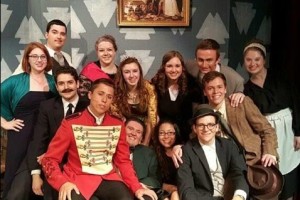 What makes acting a lot of fun for me is that it can be a great stress reliever. After a long day of classes, I get the chance to take a break from studying and slip into another world for a couple hours. Now, I have to say that acting itself can be stressful, especially when the performance date is rapidly approaching and you don't feel ready! But overall, acting is a fantastic opportunity to step out of the mundane shoes of everyday life and jump into the boots/sandals/heels of some other time and place!

Acting may not be your thing. That's fine. Everyone's different. However, even if you don't enjoy acting, I would recommend coming to see the plays that are performed here. If you missed Anastasia, don't worry: there are several more productions coming up this semester. The next one will be Les Misérables, being performed April 2 (and I'll be in that one too!), followed on April 30 by A Connecticut Yankee in King Arthur's Court, plus the numerous Dramatic Productions coming up. So if you get the chance, come out and see them. They're definitely worth attending!