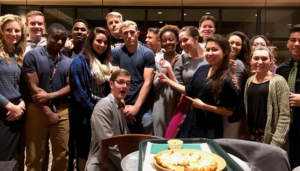 Once you're settled in for the year, especially if you are an upperclassman who is in a major that has almost every class with the same group of people, you can get trapped inside a bubble. You only socialize with those same people, in the same year as you, in the same major, on the same residence hall floor, who are just, you know, the same. Take advantage of the amazing diversity of college, and get out of your social bubble!

Be aware of other interests here on campus. If you are as athletically gifted as I am (i. e., you can maybe run a 100 minute mile), still get involved with the sports crowd. If you have a roommate on a sports team, go out and cheer them on! Take time to visit the VPA for a senior art show, or join a fun group playing board games (I see you people in the Commons!) You'll probably meet lots of people who you haven't really interacted with before.

Be introduced to new cultures. If you have an international acquaintance, go to dinner with them and their international friends sometime. You'll often be surprised to learn how similar and yet how different our cultures can be, and take the chance to enjoy learning about that. We have students from Germany, Spain, Mexico, Canada, South Korea, Japan, Papua New Guinea, Jordan, New Zealand, and many other countries. The same goes for the international students: come get to know the American students! Take your chance to mingle when you can, because it's unlikely that many of you will experience such an internationally diverse group again.

Be exposed to other students' majors. Some majors are very insular just by their nature. For instance, nursing majors have a very set schedule of classes and hours of clinicals, and computer science majors are constantly in the same lab programming. If you are in one of the more close-knit majors, remember that there are people outside of your class. You might find somebody who loves your favorite book, film, play, car, oddly-photographed-foodie-dream (you get the idea) just as much as you do. Even though it's great to have friends from your major, remember to make friends by choice, not by sheer circumstance.

With such a diverse campus, it is actually quite easy to just fall into your own little bubble in the sea of people. Don't just float along with the same group (though I'm sure they really are lovely people.) Get out, get involved, get acquainted, and burst that social bubble!