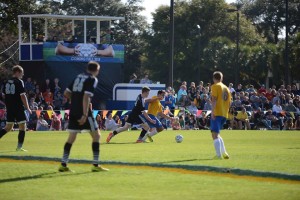 The players were ready. Waking up on Thanksgiving Day, they prepared for what may have felt like war, war for the honor of being the champions of the 40th Turkey Bowl.

After some pre-game warm ups, the Sharks and Spartans charged the battlefield. I was sitting right behind the goal (afraid a ball was going to come hit me in the face), screaming and cheering for both teams. Toward the end of the first half, a goal was made from sophomore striker Nick Tungl for the Spartans, leaving the game at 1-0 Spartans at half time.

The real treat came at half time when we got to watch man's best friends doing special tricks and strutting their stuff. Even though the wind tried to mess with the dogs' frisbee talents, they still did a miraculous job and really wowed the crowd.

During the second half of the game, nerves were high on both sides. It was difficult to stay in my seat as many close shots on goal were made by both teams.

Spartan Victory! After a great game by both teams, the Spartans took home the victory of winning the 40th annual Turkey Bowl. The Sharks played their hearts out and maintained a great sportsmanlike conduct during the entire game. Well done to both teams!

View all posts by Alex