While many are preparing to go with 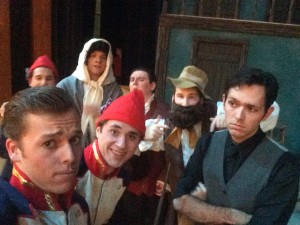 that special someone to the next installment of PCC's Fine Arts Series, I look forward to The Scarlet Pimpernel with a different mentality—you see, I'm in the production. For the last couple months, myself and the rest of the cast have been memorizing scripts, rehearsing blocking, and of course, practicing our sword fights. In only a few days, we shall see all our preparations come to fruition.

So what is the Scarlet Pimpernel about? For those of you unfamiliar with the story, it is set during the French Revolution. As French aristocrats are being executed left and right, a mysterious man known simply as the "Scarlet Pimpernel" has been rescuing the innocent aristocrats. For this, he is being hunted by the French government. Who could he be? Well, you'll have to come to the performance to find out! Full of bravado, romance, and sword fights, The Scarlet Pimpernel will be quite an entertaining production.

So now that I've told you about the play, I'd like to mention what it's like to be in a Fine Arts production. Things are a lot different on the other side of the curtain. While some people just think of actors rehearsing their parts backstage, there is a lot more than that going on. Stage crew members bustle about making sure that the background sets are completed in time for the production. Meanwhile, light crew, sound crew, and the costume department all strive to make sure that each of their respective elements of the play are prepared as best as they possibly can be.

Seeing all this going on backstage has given me a better appreciation for all the hard work that goes into making a Fine Arts performance.

So why else do I enjoy being in Fine Arts? Well, I have quite a few reasons, but in order to keep things concise, I have marked a few of my favorite things about being in a Fine Arts production:

No matter what role you get in Fine Arts, you will learn a lot! It doesn't matter if you are the lead role or that one guy in the background: you will definitely get a better understanding of acting. There really aren't any "extras" in Fine Arts.

These all depend upon what time period the production is set in and what character you are. A pirate costume, an elegant dress, swords, bonnets, or even scooters are possibilities!

This is perhaps my favorite part of being in any production. Not only do you get a chance to meet people from all different majors, but you also form bonds of friendship with many of them.

When you're burned out from a long day of classes, it's great to get a chance to relax and have fun being someone else for a while.

So you see, Fine Arts productions are a lot of fun to be involved in. It can be a lot of work at times, but in the end it's definitely worth being a part of. So next time you see auditions for Fine Arts, or any production for that matter, try out! I'm pretty sure that you will enjoy it!