Lions, and Wolverines, and Bears! O My!

Amidst the throngs of people, lions, wolves, and bulldogs roam. Smoke cannons shoot off in the distance. There are pirates, life-sized social media pictures, and more... To add to the colorful scene, carnival music plays in the background, and the aroma of dozens of food items wafts through the air.

This might seem like I am describing some distant, exotic land, but would you believe that this all took place only a few days ago here at PCC?

After their first full week of classes, PCC students like me got the chance to lay aside the textbooks and take part in Greek Rush, an activity designed so that freshmen can decide which collegian they would like to join.

The college's Main Drive was lined with booths, and at each one, upperclassmen attempted to persuade freshmen through words, food, and drinks that their collegian was the best.

One of my favorite booths was the Hornets’. The Hornets had set up a dunk tank, and freshmen were able to try their luck at dunking both members of the Hornets collegian and PCC staff members. Freshmen were not the only ones to get in on this fun, however—President Shoemaker himself dunked the Campus Church's song leader! 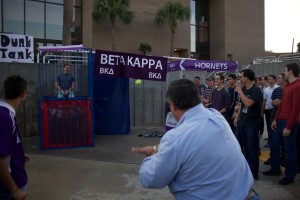 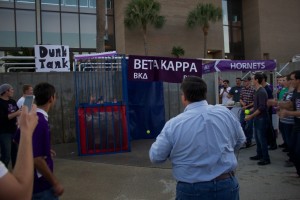 Greek Rush was a fun time for everyone. As an upperclassman, I wasn't able to taste the foods or take part in the games like the freshmen could, but I enjoyed talking with freshmen, seeing the sights, and being part of the parade that followed the booth presentations.

Since classes can be challenging, it was nice to catch a break and have fun for a while. That's what Greek Rush is all about!