Visually, they have a powerful way of really bringing a point across—I mean, if they don’t go wrong. There was this one time when my Sunday school teacher dropped a penny into a jar of vinegar and then got really mad when nothing happened. I don’t really remember anything about that Sunday school lesson except that my teacher got really mad. I guess an object lesson can go two ways.

But here’s an object lesson for you—let’s hope it works out. Below is a collage of my Proclaim Ministry Team photos from our summer tour 2014! 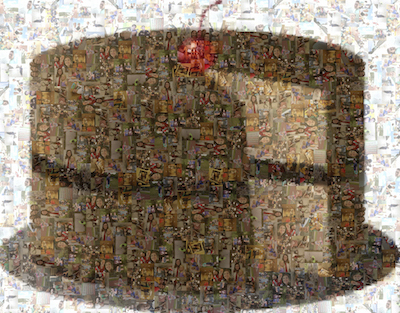 Now back up from the screen to see the bigger picture. Dun Duuuuun. It’s actually a picture of a chocolate cake. Mmmm.

If you’re a mosaic-savvy kind of person, you probably could tell that it was a mosaic right off—I hope. Either way though, the big picture was clearer once you’d stepped away from it.

And speaking of changing subjects, our team had a great summer! We toured 16 states and covered over 14,000 miles. We weren't the only team traveling though—five other teams covered all areas of the U.S and one group stayed right at PCC to help out with Teen Extreme Camps.

The Drama team (us) had the opportunity to present our drama pieces, songs, skits, and poems in church services, conferences, and even summer camps across the Midwest! We learned a lot, played about a million volleyball games, ate about a million pizzas, and wore out a few pairs of shoes.

Sounds amazing, huh? It was. But I want you to know a fantastic, life-changing summer was made up of a thousand smaller moments and choices—sometimes challenges, often plain old hard work, but, yes, many wonderful moments as well.

Now, a month later, hindsight is still kicking in as I step back and the big picture of my summer on the road becomes clearer day by day— a mosaic, if you will, of small moments from the whole summer.

What does all this mean for you? You are living a big picture right now. The things you’re doing, the choices you’re making are crafting something much bigger than today. So! Commit your works to the Lord—He promises to direct your paths. Choose to be intentional about the future—the big picture—you are investing your present in moment by moment.

View all posts by Anna Grace