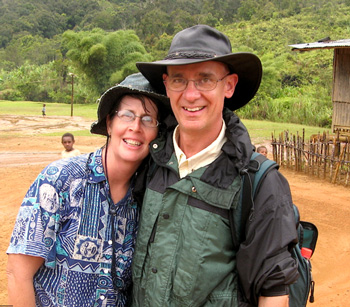 Mr. and Mrs. Allen in PNG

If you haven’t caught on yet, the title of this post is not in English! It is in a language called Tok Pisin, the language spoken by the people of Papua New Guinea (PNG). A few weeks ago John Allen, missionary to PNG, came to speak in chapel here at PCC. I had the privilege of interviewing him and getting to know a little bit more about his life as a missionary. It was nice to learn a little more about PNG since I will be going there this summer to work with the Allens! Hope you enjoy it and learn something new! ☺

How did you learn about PNG?

Years ago, I was exposed to tribal missions by a Venezuelan missionary who worked among tribal people. I hadn’t realized there were still tribal missions in the world. After I met him, I found that one of the last tribal frontiers was New Guinea. Then I saw the video Ee-taow in the early 90s. The Lord opened my eyes—wow, there are people that haven’t heard!

How did you know that God had called you to PNG?

I had tried to go to mission fields from 1980 on, and the Lord would never give me peace. I tried really hard to go to Russia—I went there three summers and begged God to let me stay. I can tell you what 95% peace is. I kept thinking, well maybe the little piece that’s lacking is that I need to step out, and every time I tried to step out, the Lord would stop me completely in my tracks.

When we went to see Matt and Becky [his son and daughter-in-law who serve in PNG] in 2005, I didn’t think of the Lord calling me there—I didn’t really like it. It was the Lord. When Matt was able to share with me his burden, I know he didn’t think I would be the one to come help. He said, “I need help with language, I need help with medical, and I don’t know where I’m gonna get this kind of help.” And I thought I don’t know either.

That night, the Lord began to speak to my heart. I remember crying and saying, “No, You wouldn’t let me do this after I’ve tried so many years.” My wife, who didn’t know all that Matt had told me, said, “You know, I think we could do this kind of a ministry.” And I said, “Really? Well, let me tell you what Matt said.” I remember stepping out on Matt’s back porch, and I said, “God, is this that 5% peace I’ve lacked my whole life about missions?” And I really felt the Lord said, “Here’s your green light, this is yours, this is where I want you.” It was a calm thing, and I just wept. This is what I’ve always wanted to do: I wanted to be in missions. When Paul writes about a peace that passes all understanding, I truly experienced that peace and have that peace even today.

What are some barriers that you face in PNG?

Obviously linguistic—their tribal language is extremely difficult, especially because it’s not written, so there’s not a whole lot I can go on. There is also a cultural barrier. You must learn to turn off the switch in your brain that thinks one way and learn to put yourself in their frame of mind and try to understand why they do what they do, or why they think it’s logical. Humans are prejudiced—we are all ethnocentric; we all think our culture is it. That is one of the barriers that we face.

What is one of the hardest things about being on the mission field?

Being away from family and friends in the States.

What is one of your favorite parts of being on the mission field?

I love the whole thing. Our ministry is so physical, spiritual, and emotional that at the end of the day, I collapse from exhaustion. In America, we’re not a physical ministry. We get in a car and drive someplace. In PNG there’s no car. You hike everywhere, come home, and then part of the roof is broken. So you have to get saws and hammers and repair the roof out of raw materials.

Not only is it more physical, but it is also more emotional. Some people get in our yard and look right in our window. Because of that, we have to be conscious from morning to night about what we’re doing, saying, and thinking spiritually. At the end of the day it is tiring, but it is so rewarding.

What is some advice that you would give to today’s young people?

Everyone should be involved in missions to some extent. Everyone, every day, can pray. They can partner with a missionary (or more than one missionary) and covenant to pray for them and learn about them.

Always be involved in giving. When you don’t have "skin in the game," it doesn’t matter. Make an investment of your time, finances, and heart. It’s not really an investment until it hurts. Passion for serving God carries a risk. The safer you want to be, the less reward there will be. People need to learn how to stick out their necks and be “broken bread, poured out wine, and willing to be the doormat for the world“ (Oswald Chambers). That’s hard, but that’s where it starts. It is where the attitude toward Christ from the heart is poured out. Those are the young people and adults that start going.

View all posts by Ashley