Earlier this semester, my collegian, the Bengals, went on our members’ only outing. Our vice president, Erin, planned this event. I was looking forward to this outing with excitement because this was my last outing, since I’m a senior this year! ☺ 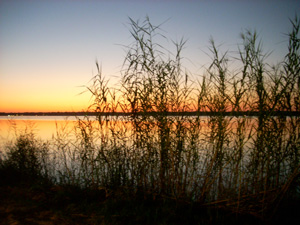 We headed to West Campus, which is on Perdido Bay, for dinner. We arrived just in time to enjoy a beautiful sunset. Panera Bread catered our meal with sandwich selection and a cookie.

After dinner, we went to “The Arena” on the Perdido River to play laser tag, bazooka ball, and mission possible. I had never participated in any of these activities before, but I decided to go and have fun. Upon arrival, we discovered that there were already two other collegians there. While waiting for the other collegians to finish, we divided into two groups. Before my group started laser tag, we put on our vests and received our guns. The assistant explained the rules, activated our guns, and then started the game.

We ran all around the arena, hiding behind the various barriers, and shooting our targets on the opposite team. Suspense music played in the background. Sometimes, members from the other team dared to infiltrate our side of the arena. At the end of our round, my team came out as the winner!

Once we finished laser tag, we moved to bazooka ball. During a very fast 30 seconds we entered the arena and filled up the pockets of our vests with balls. Quickly, I ran behind a barrier and began stuffing balls in my gun and shooting. I managed to hit many of my targets while shielding myself from the others. Somehow, in the course of the game, someone managed to shoot a ball in my direction, and it hit me on the forehead. The game ended quickly with my team losing by three points—sad day for us. ☹

Next, we played a game called mission possible, trying to get across a dark room with laser beams while breaking as few beams as possible. Many girls did the army crawl to get through, but somehow, I managed to get on my back. With no way to roll over, I completed the game on my back while breaking only two lasers! 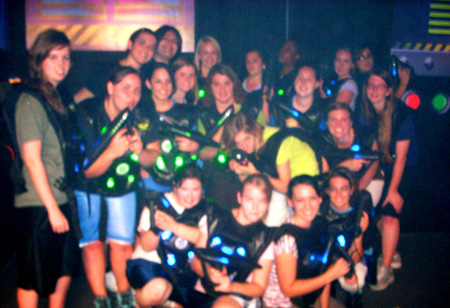 After finishing Mission Possible, we joined the other half of our collegian. We chose to do laser tag a second time. My team won again! Before we took our vests off, the assistant took a group picture of us with our equipment on. The picture is hazy because fog was used during the game.

After we completed all the activities at the Arena, we headed back to West Campus for our bonfire. Once around the fire, our chaplain did a devotion based on a passage from Isaiah. We sang some songs, played a few games, and spent time talking and fellowshipping. We gathered for a group picture on one of the picnic tables.

Around midnight, we loaded back on the bus for the ride back to campus and arrived shortly after 12:30 am. I returned to my room and was asleep before my head hit the pillow. This was a wonderful conclusion to my collegian outings. I very much enjoyed it! ☺

View all posts by Kelly