How NOT to Ask a Girl to Fine Arts

Fine Arts season is coming again in two weeks, and I'm excited to see what the H.M.S. Pinafore is all about!

Yes, Fine Arts is an amazing time of enjoying drama and music, but it’s also the time of the semester when many of the guys choose a certain special lady to ask to accompany them. I’ve heard of guys writing a note on balloons, setting up treasure hunts, and even writing poems to ask their dates to attend Fine Arts with them. There are so many great ways to ask, but I probably can’t create a list of all these great ideas. However, I can give an example of what not to do. Guys, pay attention. Girls--just enjoy the story.

It happened almost exactly three years ago. It was my very first semester, and I had met a very nice girl. There was chemistry between us. Literally. We met in chemistry laboratory. Fine Arts was coming soon, but amid the romantic aura of chemical fumes, beakers, and Erlenmeyer flasks populating the atmosphere, I had not gained the courage to ask her during lab. So I waited.

I worked at the Hub in the Sports Center back then, running the register and making mochas, lattes, frozen blends, icees, and snacks. One night, I saw her in the Sports Center while I was working. My heart began pounding. I knew I wanted to ask her, but I just didn’t know how. I nervously paced around the Hub as she bowled and went ice skating.

And then the unthinkable happened.

She began walking to the Hub. I felt trapped inside the eternal circular counter surrounding me. There was nowhere to run. I pasted a smile on my anxious face as I walked to the register to take her order. She ordered a dark chocolate mocha. I think I mumbled a few things, but her bright blue eyes threw off my senses. The last thing I vaguely remember after taking her order is adding the whipped cream to top off the coffee. I returned to the counter to give her the order. I forced myself to ask.

“Are you going to Fine Arts with anyone?”

“No,” she answered unassumingly.

“You can go with me if you don’t have anyone else to go with,” I blurted.

I couldn’t believe I had just said that. “You can go with me if you don’t have anyone else”? Very smooth, Chris. I bet you practiced that one a thousand times in the mirror.

Amazingly, she said yes. I vaguely remember her walking away, enjoying her coffee as she left me with a stupefied smile. 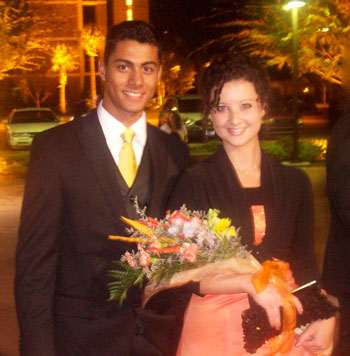 The next week went by quickly. We went to Fine Arts with two other friends and had a blast.

Believe it or not, she became my betrothed three years later. Back then, I had no idea this would be the girl I was going to marry, especially after I performed the most pathetic method of asking her to Fine Arts. Guys, that’s definitely no way to ask a girl. I didn’t even ask! I offered. Rule number one for asking a girl to Fine Arts: you should actually ask. Here’s an original example I came up with: “Will you go to Fine Arts with me?” You can quote me on that.

No, it’s not required to bring a date to Fine Arts. You can go with whoever you want. Asking someone to attend with you doesn’t mean you are both making a life-long commitment. It’s just a great way to meet people and to have fun. That’s what fine arts is all about. Girls, feel free to comment to help some of these guys out. Guys, let me hear your ideas too! Happy Fine Arts!

View all posts by Chris