A Gift Of Life

The blood drive was held on campus from Tuesday morning through Thursday night. Wanting to go early in the week, I went with my friend Nikki on Tuesday night.

To get prepared for the blood drive, I ate spinach salad and oranges for lunch the two days before the blood drive. Then the day of the blood drive I drank several glasses of water and packed a small blanket—because the buses are cold! ☺

Upon arriving at the place where all the buses were, my friend and I were directed to a tent where everyone went to sign up and fill out some questions. Then we were directed to a bus where a nurse checked our temperature, blood pressure, and iron levels to make sure that we were healthy enough to give blood.

After the nurse was done, we waited till there was an available spot on the bus. After a short wait, a few spots opened up and it was our turn to give blood. Nikki was very calm and relaxed, while I was on the other side taking deep breaths, forcing myself not to think about the huge needle! A few seconds later I was amazed to find that the needle was already in—I didn’t feel a thing! 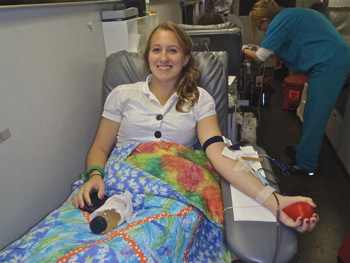 It took about fifteen to twenty minutes, and then I was done! As Nikki and I began to leave the bus, she began to feel lightheaded, so the nurses sat her down and gave her something to drink. After just a few minutes, she was feeling much better!

In the end we had each saved three lives, received a $5 gold card to spend here on campus, and had fun while doing it! ☺ If you ever get a chance to go to a blood drive I highly recommend it! Just don’t forget to bring a blanket! ☺

View all posts by Ashley