Get to Know Mr. McBride, Part 1 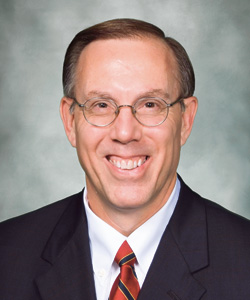 It’s hard to imagine that Mr. Denis McBride, a popular PCC faculty member and a favorite of students around the world as an A Beka Academy video teacher, never even planned to be a teacher in the first place! Read what he has to say about how the Lord led him to be a teacher, his funniest moment as a teacher, his salvation testimony, and much more.

Q: When did you trust Christ as your Savior?

July 19, 1970. My friend was not walking with the Lord, and his dad, who was a pastor, was trying to get him back in church. He called me one afternoon and said, “We’ve got this youth thing at my church. I don’t want to go, but you know my dad’s on me. How about going with me?”

That was the first time in my life I had ever heard the gospel clearly explained, and I responded in that church service. My friend also rededicated his life that day, and then he and I got busy trying to win some of our high school buddies to Christ.

Q: Did you major in education in college?

No, my major was theology. My desire was to be a youth pastor.

Q: How did you transition to the role of a teacher?

I was a youth pastor for seven years, in churches that had schools. The administrator would say, “You’re the youth pastor; would you teach Bible in the school?” Later, someone found out I had a love of history. The transition from youth pastor to classroom teacher was about five years.

Q: How long have you been teaching? 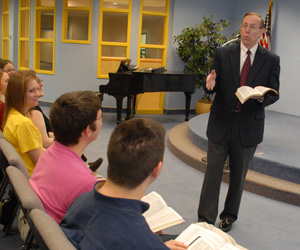 Q: Did any particular person influence you to become a teacher?

No, the Lord just called and opened and closed doors, and He gave me a love of it and an opportunity to work with young people. Being a youth pastor was a great help because I understood and liked young people, and it really helped me in the classroom setting.

Now, teaching and teaching right are two different things. Dr. Petermeyer, the principal at the Academy at the time, was a tremendous influence on helping me become not just a teacher, but a professional teacher.

Q: What led you to come to Pensacola Christian College?

We had been in three different schools, and they kept closing. These were people who were not necessarily committed to Christian education—if finances got tight or if a new pastor came and didn’t want the school, the schools kept closing. We had helped start a school in Tennessee. The school was in its second year and had about 300 students. It was doing very well. Then the pastor left, and the deacons and pulpit committee decided they didn’t want the school.

We wanted to go somewhere where people believed Christian education was necessary, not just nice. I said to my wife one day, “Why don’t we just apply at Pensacola.” She laughed! She made the comment, “Like they’d hire us!” I said, “Well, let’s find out.” It’s just an amazing thing how the Lord opened the door.

Q: What is the funniest thing that has ever happened to you as a teacher?

I taught the same lesson two days in a row. I had broken my shoulder and was in pain and on muscle relaxers, and I coached three away basketball games that week and didn’t get into bed before 12:30–1:00 a.m. three nights out of the five. Then I walked into class and taught the exact same lesson on Friday that I had taught on Thursday.

I got about halfway through the lesson, and a couple of girls were laughing, and I couldn’t figure out why! Finally, I walked back to one girl’s desk and said, “You’re going to tell me what’s so funny, and you’re going to tell me right now.” She looked up and said, “Mr. McBride, you taught this lesson yesterday.” Same jokes, same illustrations. Of course, the tragic thing was that those two girls were the only ones that noticed!

There’s more! Click here for part 2. You will enjoy it!

26
The thoughts and opinions expressed in Life in the Nest are those of the authors and do not necessarily reflect the official policy or position of Pensacola Christian College.

View all posts by the Blog Admin